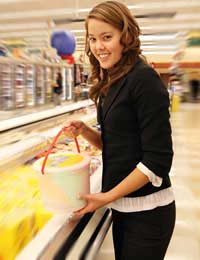 The E numbers prefixed from 300 to 399 are mostly antioxidants and acidity regulators with the odd few other additives thrown in too. Here we look at what they all are and why they’re included in foods and drinks.

Antioxidants are used in foods in a similar way to preservatives, as they play a key role in extending the shelf life of products and helping improve taste and the look of food. They also help reduce a process known as enzyme browning, which is when fruits and vegetables become discoloured after a while.

Antioxidants can be both manmade/synthetic and natural. An example of a natural antioxidant found on the list below is E300, ascorbic acid, which is in fact vitamin C. Additionally, several tocopherols are listed from E306 to E309, and these are natural ingredients from the vitamin E family.

As far as synthetic antioxidants go, one classic example is the gallates, which occur from E310 to E312. These are a key ingredient in products such as margarine and oil, acting as a preservative to keep products lasting longer.

Additives called acidity regulators are used to help control or change the alkaline or acid levels in foods. It helps products become more palatable to eat and ensures foods stay like that as they are being made (sometimes the stages of processing can otherwise alter foods, if additives such as this aren’t included).

Within the E300 to E399 there are a few red herrings too. These are additives that have been classified to lie within this group, but aren’t actually an antioxidant or an acidity regulator. This is because there have been times when it just seemed easier for the classification experts to include them there – where possible the groups stick to their overall categories, but on some occasions, there are added extras included. Where these occur, they are noted on the list below.

It is also worth noting that many additives have numerous roles. There are several antioxidants and acidity regulators that also serve additional purposes.

The following list offers a complete reference guide to all the antioxidants and acidity regulators found within the E300 to E399 category. If you’re keen to avoid buying products with these E numbers in, or want to keep track of what additives are in certain products you’ve considering purchasing, then why not print out this list and take it with you when you go shopping.