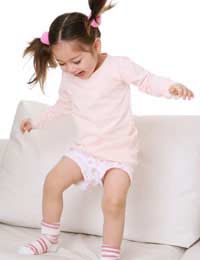 Most parents know what hyperactivity in their children entails and how difficult it can be to calm down a hyper child, but what exactly is ADHD? ADHD stands for Attention Deficit Hyperactivity Disorder and it's believed to be caused by a form of chemical imbalance that occurs in the brain. This imbalance affects various parts of the brain, including the areas that control attention, concentration and impulsiveness.

This means that a child with ADHD can be very hyperactive at times, but it’s more than just that. Their behaviour can veer between hyperactivity and always wanting to be madly on the go with activities, to being a bit spaced out and unable to pay enough attention to anything. Children can also be very distracted, so it’s hard to get them interested in things for very long and they may have problems when given instructions to follow.

Needless to say, it can be hard work for parents who have children with ADHD. There are medications available to help control the symptoms, such as Ritalin, and prescriptions for such drugs have doubled in the last four years alone. In fact, there’s been a huge increase in the number of children being diagnosed with Attention Deficit Hyperactivity Disorder in recent years and now at least one in 20 children in the UK is believed to have the health condition.

With the increase in numbers becoming ever more apparent and parents worrying about the health of their children, much attention has turned towards nutrition and the idea that what children are eating and drinking may be influencing their health.

For many years, parents of children with ADHD and hyperactivity have been concerned that diet may play an issue in their children’s health disorder. Most importantly, that the additives added to many popular foods and drinks – including products aimed solely at children – may be increasing their symptoms.

One of the most compelling research results providing evidence of a link between E numbers consumed in popular foods and drinks and hyperactivity and ADHD was revealed in September 2007. A government backed study carried out by researchers at Southampton University showed that seven synthetic food colourings and preservatives showed direct correlations with cases of hyperactivity, ADHD and allergic reactions in young children.

The team looked at the effects on 153 three-year-olds and 144 nine-year-olds as they consumed foods and drinks that contained various commonly used additives. They found that instances of hyperactivity and distinct changes in normal behaviour were highly evident after certain additives were consumed. In particular, the following E numbers were involved:

The good news is that this research did finally make the government sit up and take note, to some degree, and government health experts recommended that parents avoid all of these suspect E numbers where possible. It’s also hoped that they will eventually be discouraged from being included in food and drinks in the UK entirely, as other countries have already done.

In the meantime, it again highlights the importance of taking care of what you feed your children. It may seem tiresome to have to study food labels endlessly, but the only sure fire way of ensuring what is included in the food you’re feeding your children is to either make everything from scratch yourself, or get into the habit of reading food labels carefully.

How Easy is it to Completely Avoid E Numbers?
Share Your Story, Join the Discussion or Seek Advice..
I was diagnosed formally with ADHD when I was 14 however symptoms were there from about 8 onwards (I'm 26 now). I was put on medication at 14 and then due to the side effects I had horrendous anxiety so I was put on Prozac at 15. This then led to insomnia and sleeping tablets. I decided to come off my medication which took 2 years to wean off safely. I was kicked out of 3 secondary schools and ended up being home tutored and then in an education centre. As an adult I avoid most food and beverages containing artificial additives. And I know when I've consumed something containing them. I get irritable, silly and sometimes aggressive. I have just completed a research project looking at the effects of additives. And it's phenomenal the amount of research studies that back this! Please think about the things consumed before medication!
Ali - 2-Aug-18 @ 12:02 PM
I am an ADHD sufferer and have been taking ts since I was 6 years old. I noticed that my medication was making me anxious and quite paranoid. I stopped taking my tablets and got thrown out of 3 secondary schools. I have done a little test on my self with help from a close friend. I decided to to eat lots of jelly sweets with Enumbers and drink coke all the time. I started to get angry a lot more and really hagitated. After that I went on a really good diet with fruit and salads and good healthy food. I drank lots of water. I am still doing this now and I am a lot better. I havnt cut out coke a fully. That wouldn't be normal as an 18 year old girl. I. Am highly inteligent and that is to do with ADHD.
Skittle - 26-Sep-12 @ 9:14 PM
My son is now 10 when he started school at 5 he was always in trouble could not sit still, I could not cope then in primary 2 teacher told me she thought he was ADHD I did not want to give drugs to my son so started to look up what can help ADHD and found these E numbers I cut them out of his diet completely it was hard for him at first but he soon realised he was no longer getting into trouble so he always checks all sweets and juice himself now. If anyone is concerned about their child's behaviour this is definitely the way to go. My son is never in trouble at school anymore and it is like having a different child even 1 of 100s and 1000s can turn him into a nightmare child. Hope this helps mothers out there struggling.
Trace - 22-Jun-11 @ 10:13 AM
Title:
(never shown)
Firstname:
(never shown)
Surname:
(never shown)
Email:
(never shown)
Nickname:
(shown)
Comment:
Validate: