Home > Case Studies > Bringing Up a Baby on an E-number Free Diet: A Case Study

Bringing Up a Baby on an E-number Free Diet: A Case Study 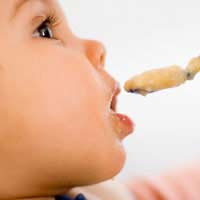 Many people are concerned about the growing quantities of E numbers in our food and drinks, but is it possible to avoid them completely? One family hope so and are trying to consciously bring their baby up on an E-number free diet.

Cathy and Mike Richards chose to go the natural route with their first child, Sam, and are aiming to do their best to bring him up on an E-number free diet. Here they tell us the reasoning behind their plan and how it’s going so far.

“We do try and live as natural and eco-friendly a life as possible and were concerned about the huge amount of E numbers and additives contained in foods today. Our own diet is as healthy as possible – we have a vegetable plot and grow a lot of our own produce and make homecooked food as much as possible, to avoid having to buy processed foods. We also try and buy organic meat wherever possible and support local farmers, rather than purchasing meat that’s travelled miles. Of course, it isn’t always possible and eating out is a bit of a minefield, as you can never be sure where things have come from.

"When we had Sam we knew that we wanted to give him a good start in life and felt that trying to avoid E numbers completely would be a good plan. He was breastfed, which provided lots of healthy nutrients and, we started weaning Sam onto solid foods when he was six months old.

"Rather than buying baby foods, we made all our own purees for him, using fresh fruits and vegetables, so we were certain of what we were feeding him. Having said that, some of the products we did look at seemed quite good, with no E numbers visible on the packaging and quite a few organic products available, but we felt it was easier to make our own.

"We gradually introduced new foods over the months, including things like rice, pasta and cereals. He’s always enjoyed healthy snacks that he could pick up and munch on by himself, like pieces of fruit and vegetables and cheese. Mini rice cakes have been good too, but where bread is concerned, we’ve chosen to make our own, as we can be sure then that no preservatives or other unwanted additives are added to the ingredients.

Sam is now 12 months old and growing fast! The first year of his life has been relatively straightforward avoiding E numbers, but we’re aware it may not be quite so easy in the future. Our aim is to keep feeding him a healthy diet at home, making and growing as much food as we can, and avoiding buying products with E numbers in. At home it’s not too tricky, but we’re already aware that other people don’t necessarily share our views and don’t think twice about feeding him shop bought food.

"Our views are firmly reflected in our own eating habits too, as we both try and avoid processed food as much as possible. Although manufacturers make it appear like it’s all totally harmless, we’re not so convinced – why add something artificial and fake to a product that is perfectly fine without it? It’s worrying to think of the long-term health effects some of these additives could have too.”